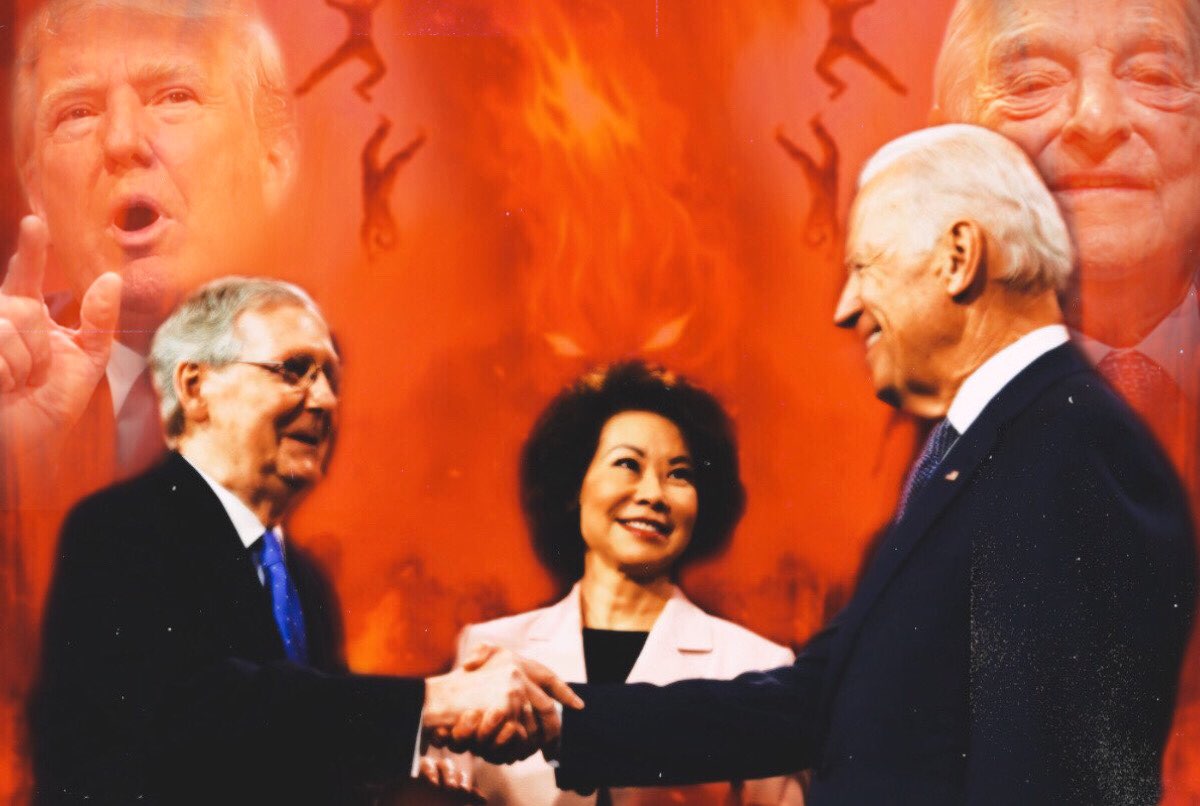 A leaked excerpt from an upcoming book by author V. Johnson has given new life to President Donald Trump’s claim that the 2020 election was rigged and stolen. But here is the twist: after a year and a half without a single Republican state conducting a complete investigation, let alone amending the outcome, suspicions are now shifting towards the GOP.

Poll after poll has shown that upwards of 90% of Trump supporters believe he won the election by a significant margin. Given the results reported by major media outlets and certified by every state, only massive, widespread fraud could account for a discrepancy of that magnitude. The only realistic way for anyone to get away with that level of criminality is if Republicans and Democrats were working together.

Trump and his supporters have long understood this. It has been a source of constant frustration for the last eighteen months. Conventional wisdom has been that Democrats were primarily responsible, along with a small number of “RINOs”. However, it is now becoming clear that Republicans were likely the masterminds.

As the 2022 midterm elections loom, GOP candidates scramble to keep Trump supporters singularly focused on Joe Biden. The less discerning are taking the bait. True Conservatives, however, are beginning to demand answers about 2020. The fact that Republicans are not providing any is quite telling. As one angry voter puts it, “investigations run by criminals expose nothing.” So far that checks out.

Why Would The GOP Rig An Election Against Trump?

2020 was a plot to install an incompetent, historically unpopular administration in the White House. The idea that Democrats could do something so clever to achieve something so dumb never sat well with most. Wouldn’t they rig a Presidential election for someone less senile and more popular with the radical left, like Bernie Sanders or Elizabeth Warren? What about the Senate seats needed to pass their socialist agenda over a filibuster?

For Mitch McConnell and GOP brass, on the other hand, the plot could not have worked out any better. In 2016, Republicans and other wealthy elite fought tooth and nail to stop Trump’s campaign (even after it was over). Trump responded by calling them all “deep state” and “the swamp” as he rode a strong anti-corruption platform to victory. Now it’s 2022 and Trump is out of D.C., but the corrupt Republicans remain.

New evidence is being uncovered daily to support Johnson’s hypothesis. It is no secret that Republican officials had a hand in removing the President from social media platforms. Party leadership called for his resignation. Likewise, his own cabinet members, federal agencies, and court appointees undermined every effort to challenge the election results. And of course, the entire GOP has fallen in line behind Mitch McConnell and the RNC by refusing to investigate (or even discuss) the unprecedented fraud.

Many Questions Must Be Answered.

Did McConnell send an election night email to Republican state party leaders and election officials telling them to stop counting votes while the CCP hacked into the voting machines? His connections to China are no secret. Despite publicly embracing America First, Republican politicians are as tied into the globalist community as their Democratic peers.

Why was the US capitol not secured on January 6th and did federal agencies play a role in instigating the conflict for which Trump supporters are now imprisoned? That evening many Republicans reversed pledges to challenge the electoral count. Two days later the sitting President was removed from major social media platforms. Within a month not a single GOP senator or representative was making any effort to uncover fraud. Like clockwork.

The full extent of each person’s involvement in these conspiracies is still being investigated. Many believe President Trump is aware of the investigations. Perhaps he is overseeing them. One source suggests “Trump will continue to hold rallies and endorse candidates while he gathers enough evidence against the Deep State actors in both parties to lock them all up.” We are not able to confirm and we do not expect him to discuss anything until operations have concluded.

We reached out to both the RNC and Mitch McConnell for comment, but neither has responded by the time of publishing.

There is nothing the political establishment will not do, and no lie they will not tell, to hold on to their prestige and power at your expense. For those who control the levers of power in Washington, and for the global special interests they partner with, our campaign represents an existential threat.