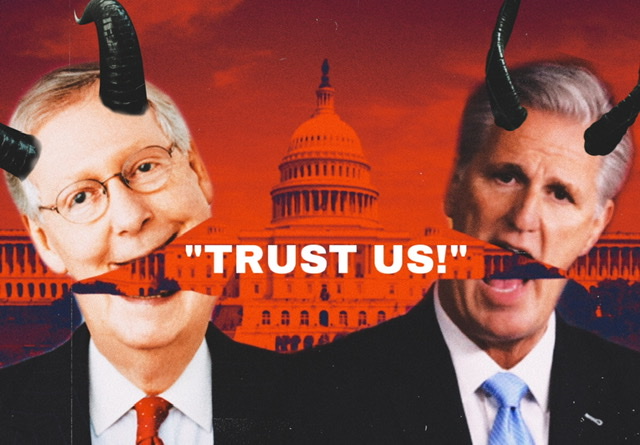 As hard as the GOP tries to get conservatives into the voting booth this November, they can’t hide the fact that a recent SurveyUSA poll shows 72% of Republicans distrust our elections. This is because most conservatives agree that Donald J. Trump won the election in 2020, not Joe Biden. The results, however, were manipulated in real-time using altered tabulating software with the help of RINOs like Brian Kemp in Georgia, and Doug Ducey in Arizona. In fact, the steal could only happen if Republicans assisted Democrats—many states where Biden “won” had Republicans trifectas. RINO GOP leadership has completely ignored the outcry against voter fraud.

Then, last week, Kevin McCarthy’s anti-Trump scandal rocked the Republican sphere to the core. It exposed many details of how the RINO’s smoke and mirrors campaign works, like using America First talking points for political gain, or feigning support for a non-existent “Trump 2024” campaign. Now, the cat is out of the bag, and Mitch McConnell’s midterm strategy under the microscope.

It’s apparent that Republicans haven’t slowed down their attempt to end our America First movement, they’ve sped up. Now, instead of just going after America First politicians like MTG, Cawthorn, and Gaetz with smear campaigns and harassment—they are targeting us voters, using misdirection, false promises, and trojan horse candidates. If RINOs and Democrats could steal an election in 2020 while Trump was sitting President, you can’t begin to imagine what they’ve cooked up since Biden usurped the White House.

The GOP campaign strategy for the midterms is simple:

It’s easy to see through the smoke and mirrors when you know the plan. So why is the GOP doing this? Answer: they hate Trump, they hate Trump supporters, and they hate America First. But, they also need those supporters to vote for their RINOs, which means they need to keep using Trump and his America First messaging. Expect to see many ”reformed” candidates who previously hated Trump now spouting off support for him.

Let’s breakdown why they are using this strategy:

Why are many Trump supporters taking the bait?

We reached out to people who believe Trump won the 2020 election but have still joined the “Trump 2024” bandwagon to ask why they’ve given up. Their answers were pretty consistent: “Trump won but it’s too late to do anything,” or “they proved the fraud but there’s no way to fix it at this point.” The problem is that those are just more GOP misdirection and lies. It absolutely can be fixed, and in order for that to happen there is still much to do.

The constitution does not specify a procedure for overturning a stolen election, nor does it prevent a stolen election from being overturned. In order to know what would happen, it would have to first be proven that Trump won the election, which would demand substantially more than the evidence of voter fraud that has been uncovered so far. Proving fraud is not the same as proving an incorrect outcome. To do that would require a full forensic audit of every ballot and every voting machine, but the GOP will not allow it.

Trump famously said, “if a thief robs a jewelry store of all of its diamonds (the 2020 Presidential Election), the diamonds must be returned.” If the GOP leadership cared about Trump and the voters they would conduct the audits, prove he won, and force the greatest reckoning in history. But they won’t, and they don’t care. They didn’t want President Trump in 2020, they don’t want America First now, and they don’t want President Trump in 2024.